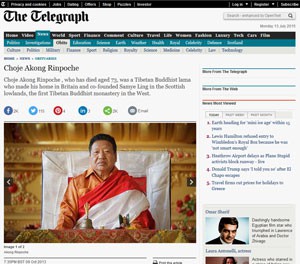 „Choje Akong Rinpoche, who has died aged 73, was a Tibetan Buddhist lama who made his home in Britain and co-founded Samye Ling in the Scottish Borders, the first Tibetan Buddhist monastery in the West.

A prominent and influential figure in the exiled Tibetan Buddhist community, Akong played a major role in promoting Tibetan Buddhist teachings and culture to the West, and through his humanitarian organisation ROKPA initiated and supported educational and medical projects throughout the world.“